With the Homey, Athom has set a new standard in home automation land. Merging the various protocols is done in a smart way. This allows you to not only use the cheaper (but less reliable) 433Mhz devices, but also the more expensive Z-Wave and Zigbee devices. This diversity of protocols makes the Homey more future-proof. For example, should a protocol such as Z-Wave no longer be developed further.

The interface of the Homey is very easy to use and feels pleasant to use. This will allow novice users to find their way quickly. Everything can be controlled via the APP which will take some getting used to. Fortunately, there are also things available through your browser such as insights, creating flows and various settings for the network.

The flow editor that you can create rules with is simply put together. This has advantages for starting users, you can easily and quickly automate rules. For advanced users, the lack of an "OR" and "AND" with ALS is a loss. As a result, some rules will become more complicated and you will need more rules than usual, so you will quickly lose the overview. Incidentally, other controllers also have problems with the proper operation of both starting and advanced users. The Homey has an extensive REST API so that you can arrange things outside of the Homey for what is good for the advanced user.

Since its last major update, the Homey also has the ability to directly start a flow. It saves extra rules and virtual buttons. These virtual buttons are now also included as standard. You no longer need to install an APP for this.

That the controller partly also does not work via the cloud is very nice. This makes you less dependent on your internet connection and the system also responds faster. You need the cloud for voice, remote access and cloud API (such as a Nest Thermostat), these are things you can do without.

The Homey has a price of € 299, - which makes it not the cheapest, but you get a controller that supports more protocols than the competitors. This makes it more future-proof. There is also a € 399 version which has more memory so that the system should run more smoothly.

Is it all a bed of roses?

The speech part of the Homey never really got off the ground. This didn't work as it should for many users. That is why Athom has decided not to support this anymore. Fortunately there is a link with Google Home and Alexa. With the first one, the Homey must be addressed first. So when you switch on a lamp you have to say: Okay, Google, ask Homey to switch off lamp x. In addition, it often happens that commands do not get through properly. This does not yet work perfectly. Athom does indicate the works on this.

Then we have the stability of the system. This is a fairly difficult point for all controllers. This has to do with many different factors: such as your network, number of devices, the amount of rules and how many APPs you have installed. This last point seems to be a problem for the Homey. You notice a clear speed difference between when you have 10 or 20 APPs installed. This is a shame, because the power is that you can install so much. The Homey Pro should solve this, but it also has a maximum number. A tip is not to mix too many different brands because each brand needs its own APP (and therefore more memory).

What I find a loss is the lack of a standard alarm and climate panel. For example, if you want to make an alarm, you have to put together quite a few rules. Would be nice if there is a standard solution for this, such as with Zipato (ZipaTile) and Fibaro (HC2). By the way, there are some APPs available where you can partly arrange this.

The part where you can install APPs is very valuable. It's nice to see the developers make surprising things, especially if Athom can monitor the quality of these. Just realize that if an APP is made by a developer and this stops that there is no support anymore. In addition, if the APP is not properly made, it can give instability to the system.

Let us conclude with some more positive points from the Homey. The support for devices is always a problem with every controller. Homey has this very well organized. Almost every device we add just works. Of course, it is a tip to check in advance if your device is supported.

The Homey has been around for a while now and since the update to 4.0, real steps have been taken to make this controller stable. You can certainly say that this product is becoming mature.

If I had to describe this controller in 3 sentences:

Homey is a very pleasant system to work with, whereby every target group can find its way. Is it the ultimate controller? No, not yet but the Homey will come close.

This review is based on: Firmware Homey: v 4.01 | APP Homey: Android

We want to thank Athom for providing a review kit.

We would like to thank Domoticahuis for making the Sonos screens available.

Because we still had some questions, we asked Homey this. I got a nice response from Stefan and the Marketing manager from Athom.

It is of course very nice that there is a possibility to make an APP as an external developer. What is often a problem is that the quality / stability of this is not always good. How does Homey keep an eye on this?
As far as we can we test the Apps (but with devices that we don't have, that is of course difficult), but in addition our community and ratings / comments are of course very important. Because each App has a Comment Thread and a star rating, it can quickly be seen which App works well. If we really get a lot of complaints about an App (which fortunately has not happened after the beta phase), we will consult with the developer if we can help them. As a last resort, we can take it offline if we find that it hurts the User Experience too much.

How is the privacy of the APPs monitored? With Android you can see clearly what is being used.
Apps on Homey must also request permission for things they do (eg listen to the microphone, can talk). Device apps don't do this because they don't. They really ONLY implement a driver, and therefore do not receive any speech, or generate it (this is all handled by Homey itself). Apps are checked by us to make sure they don't do strange things, and are all open source (the apps from the community, some of us are under NDA). Apps are also sandboxed, which means that an app can never access data from another app. An app for a Z-wave lamp, for example, cannot read your sensor, but will never receive the parsed speech commands itself (only the action that needs to be performed), or even connect to the internet at all. 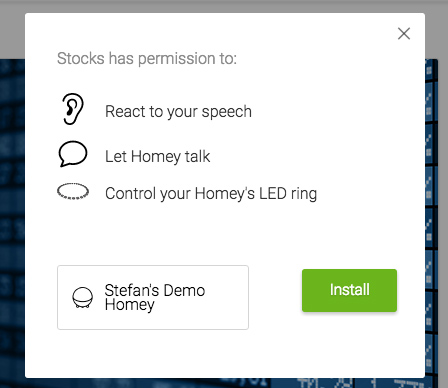 I can imagine that people have some questions about their privacy. The Homey listens all day to what is being said. Now there is of course an option to turn this off but then you will lose this functionality. Can you tell me more about how this is arranged?
Certainly! After all, Homey never listens. There is a very low level running engine in Linux that responds to OK Homey. Only when the trigger engine has heard these words does Homey start listening. When the end of a sentence is detected, we stop listening, and only that one sentence is processed via online speech engines. Everything that is said before and after is not actively heard by Homey, nor stored or processed anywhere. See also https://www.athom.com/en/support/KB000024/

Will there be an option to use multiple Homeys?
That is possible, but at the moment the possibilities for linking them are very limited. We are still looking into possibilities for expanding this, but because, for example, they cannot work together well in a Z-Wave network (because of the way in which Z-Wave works) and the like, that is sometimes sub-optimal. In principle, 1 Homey can also control your entire house (certainly send on Z-Wave or 433).

I get some questions about that people want to use the Homey as a 2nd controller (besides for example an HC2) is this possible?
This is only possible when Homey is the primary controller. As a secondary controller, Homey cannot do much at the moment, this is not (yet?) Built (and is only interesting for a very specific niche). Basically our philosophy is that the HC2 is no longer needed with Homey of course.

Your reaction has been saved. You will be notified as soon as it has been approved.